skip to main | skip to sidebar

A Chair Was There

A little background before I play with a poem or story.

One of my projects this summer--between official retirement date and date of probable move to unfamiliar but more familial territory--is to catalog my belongings and appraise the praiseworthy. Not sure how to go about the latter, but an opportunity came up for free appraisals at the local community center. I asked whether furniture could be included and was assured I could bring in my step-grandmother's rocking chair.

Easier said than done. The runners on the rocker dragged their feet out the door, into my car, out of my car, and up the walk to more doors of the community center. Inside, items other people brought in were lined up on long tables, and the audience and item-owners settled in for two hours of storytelling and value-guessing. 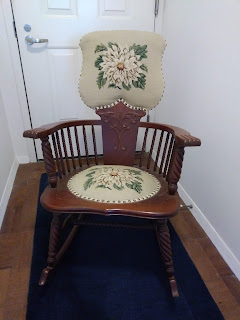 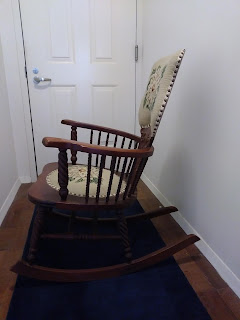 Market value, we were reminded, is what someone will pay for something. Insurance value is what it would cost you to replace something.

One of the themes that emerged in the antiques appraiser's narrative is that today's market is down from what it was about 10 years ago (recession notwithstanding). Reason: Millennials. That's right. If millennials never heard of your celebrity portrait or autograph (not even Shirley Temple?) it's not worth much. If millennials would rather go to IKEA and put together their own chairs, rocking or not, they won't want to buy your used junk (aka, their great-grandmother's Victorian rocking chair).

For two hours we learned a bit about metals (jewelry and coins), pictures, porcelains, and what-not and how to tell what's valuable and what's not. Mine was the only piece of furniture up for evaluation, and I was afraid after all that time (the session ran well over the appointed time; people had lots of stories about their stuff) I wouldn't even learn the approximate date of Grandma's chair. But finally the appraiser got around to it.

I knew the chair's dark brown stain wasn't its original. When I'd seen it in Grandma's house (Eugene, Ore.), it was stained antique white to match the needlepoint. But clearly the needlepoint wasn't original either, and that's the second thing the appraiser remarked on. (The first thing he said is "Brown is down." Dang those millennials and their open-concept light and airy aesthetic!) The wood around the needlepoint in the seat shows markings of a previous seat covering, which he said was likely cane. 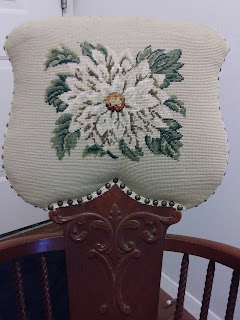 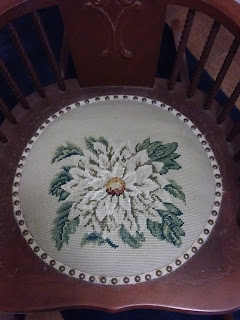 At any rate, it's likely Grandma or whoever she received the chair from thought they had better ideas than the original designer. My mother apparently liked her own idea of brown (more natural) more than the antique white. I've not touched it since receiving it from my mother so many decades ago that I don't even remember now how I got it in this apartment. Stubborn runners! 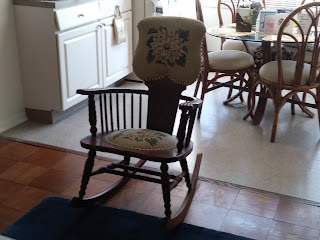 Since my very first sighting of the chair was in the mid-1970s, I really had no idea of its true age or even whether it was a mass market manufactured imitation of Something Fine. The appraiser had no hesitation dating the piece to 1880-1890. He also had no hesitation valuing it, at auction, at less than $50. (I didn't feel bad; other than the diamond jewelry brought in and a unique World War II silk pocket map, not many of the valuables were valued very much.)

Lots of things have sentimental value, which means they'll stay in the family or among old friends for longer than the IKEA chairs will last. This chair has been promised to my niece, who can decide its value based on her own aesthetic. Meantime, I have stories to get back to. This chair has seen some places I don't know about yet. It'll see a few more. Time to time travel.

Love, hosaa
hopefully not just sitting around
Posted by hosaa at 8:41 AM

hosaa
HOSAA = (rhymes with mimosa) his/her own self, and all. Or, in Pashto, "comfortable, resting."